Buffers? You Mean Those Things That Wax Your Cars?

As evidenced by the County’s recent give-away, 2010 Trees in 2010, planting trees is a high priority for the County.  What is the return on investment for such a program?  I’ll tell you…Trees:

-          Intercept water, store some of it, and reduce storm runoff and the possibility of flooding;

-          Potentially reduce energy costs by providing shade during hot summer months  (of timely importance) and/or acting as a windbreak during colder times;

The added bonus of trees when planted in a stream buffer, as is done through the Stream ReLeaf Program, is that streambanks can be stabilized; and sediment , nutrients and other pollutants can be trapped and prevented from entering our waterways.  In fact, the tree will even use up to 80% of the phosphorous and nearly 90% of the nitrogen that it takes up, two of the biggest pollutants of the Chesapeake Bay. 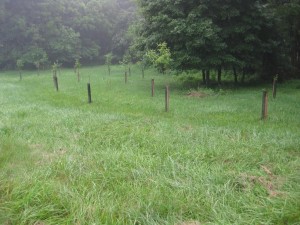 The Stream ReLeaf Program has been enabling Howard County residents to plant native trees and shrubs in stream buffers since 2003, and is now  gearing up for the Fall 2010 planting season.  A list of interested residents has been started and additional participants are welcome as well.

Since the debut of the program in 2003, Stream ReLeaf has grown from just a few participants to an annual average participation of more than two dozen residents installing approximately 1,200 native plants.

Follow the links below for the forms for the 2010 ReLeaf program.  If you are interested in participating in this program, please contact Laura A.T. Miller atltmiller@howardcountymd.gov or 410-313-1636.  If sending  an e-mail or leaving a voicemail, please include your address.